Women recently make the bulk of consumer decisions, and are set to control Australia’s wealth. Do your books really reflect this changing environment?


According to Australian Women Chamber of Commerce and Industry (AWCCI) CEO Yolanda Vega, women are changing the world, and Australia needs to take note.
“I think we’re heading towards a women-led economy, because women are the biggest consumers. They make 80% of the consumer decisions,” she said.
“And it’s not just shoes, bags and cars. It’s everything from medicine through to what accountant [or insurance broker] they’re going to choose. Currently the national global figures state that women inject $20 trillion annually into the global economy – and that is increasing 5-15% annum.
“US research shows that, by 2025, 75% of the wealth will be controlled by women, because the baby boomers are dying and the women are being left with their fathers’ and their partners’ wealth to control.
“I suspect here in Australia we’ll be heading down a similar pattern, considering our aged population.”
She added that it’s worth focusing on women at the other age of the age spectrum as well, as most university graduates in Australia are now women.
“Why is that important? The fact that women are now walking away from university in such numbers with the information they require, having access to the world on a laptop, has significant consequences. Women are now living alone. They don’t need a man to buy property – 100 years ago we were property as women.”
Additionally there are opportunities to focus on the superannuation market amongst women, with Vega highlighting the super shortfall that many women experience – as well as research stating that 53% of female business owners were not contributing to their super fund.
“We already know that as employees women are not making the same wage, or aren’t being paid equally for their jobs. Then they take time out to have children, so by the time they leave the corporate environment they have less super. 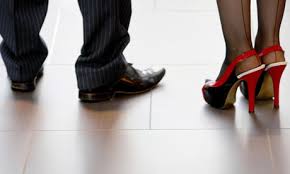 “Then they start up a business with $5,000, which is usually their savings. They don’t have access to capital, because they’re usually in a service industry. So my fear is that, if we continue with this trend and we don’t put policy and programs in place today, we’re going to end up with a million women in Australia living below the poverty line. Because they don’t have super, they’ve spent all their money setting up a business, and we already know that more than 80% of start-up businesses fail within the first two years.”
“We need to commit to changing our male entitlement culture. And we need to promote and support women at all levels.”
Posted by Happi Mess at 02:23